BENGALURU: The Kempegowda International Airport (KIA) is in talks with various domestic airlines as it puts in place a facial recognition system that will replace boarding passes of passengers. The project, titled ‘Digi Yatra’, is to be implemented in a phased manner.

“We are currently finalising the integration with various airlines’ departure control systems (DCSs) to manage the check-in process using biometric ID. The first phase will be rolled out during Q3 (third quarter) of 2019,” a BIAL spokesperson told ET. The project, officials said, will enable registration at the airport using the ‘digi yatra’ kiosk at the kerbside, terminal entry using e-gates, pre-embarkation security check (PESC) using e-gates and also boarding through e-gates.

Several airports in India are also expected to roll out a similar facility, conceptualised by the ministry of civil aviation. “The project facilitates paperless travel and avoids identity check at multiple points,” the official website states. 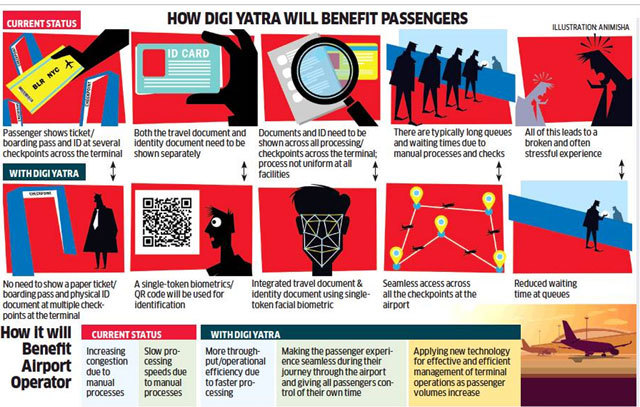 At the KIA, the first phase will only cover domestic passengers. “Once the domestic passenger roll-out is stabilised, international passengers are also expected to be included subject to appropriate government and regulatory approvals,” the spokesperson said. “We are starting with Vistara. We are also in talks with other domestic airlines as well to bring them on board over Q3 and Q4, 2019.”

In 2018-19, the Bangalore International Airport (BIAL) served 33.33 million passengers, registering a 23% year-on-year growth. Domestic traffic was the main driver of the growth, accounting for 28.82 million passengers. Officials said the management has not finalised the number of registration kiosks that will be set up for the ‘Digi Yatra’ programme.