Union Home Minister Amit Shah has moved a bill in the Rajya Sabha to bifurcate the state of Jammu and Kashmir into two Union territories Jammu & Kashmir, and Ladakh.

“Kashmir and Jammu division will be separate Union Territory with legislature,” Amit Shah told the Rajya Sabha on Monday as he announced creation of Union Territory of Ladakh.

As Amit Shah introduced the Jammu and Kashmir Reorganisation bill, chaotic scenes were seen in the House soon after the announcement of the Home Minister.

“There has been a long pending demand of people of Ladakh, to give it the status of a Union Territory to enable them to realise their aspirations. The Union Territory of Ladakh will be without Legislature,” the statement read. 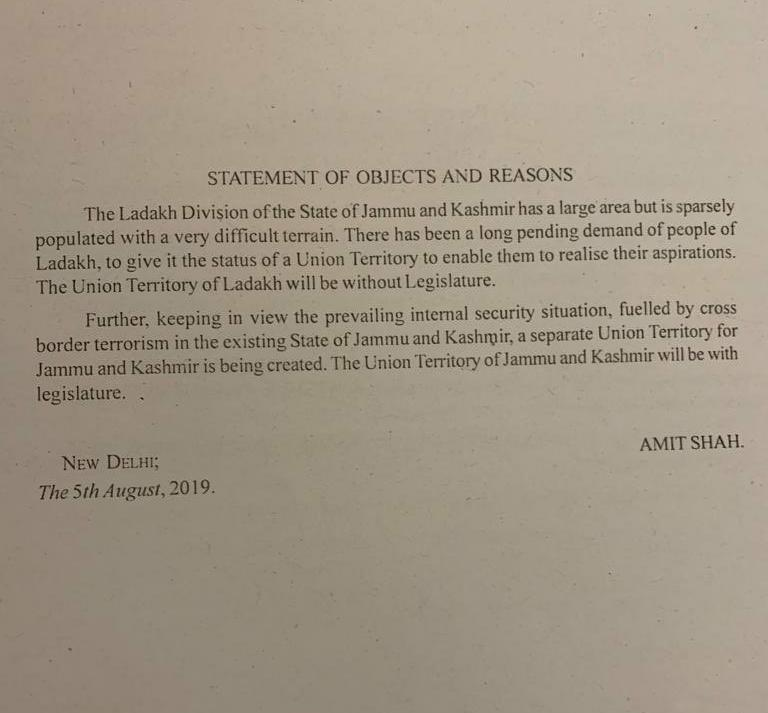 Amit Shah said the Article 370 will be revoked from the day of the President’s assent. As soon as Union Minister Amit Shah announced that removal of Article 370, the House witnessed chaotic scenes as the Opposition, led by Congress, registered strong protest against the government move.

Tensions intensified in the Jammu and Kashmir on Sunday night after Omar Abdullah, Mehbooba Mufti and Sajad Lone were put under house arrest as the authorities imposed restrictions in multiple districts in the state.

“I believe I’m being placed under house arrest from midnight tonight & the process has already started for other mainstream leaders. No way of knowing if this is true but if it is then I’ll see all of you on the other side of whatever is in store,” National Conference leader Omar Abdullah had tweeted.

Peoples Democratic Party president Mehbooba Mufti said, “How ironic that elected representatives like us who fought for peace are under house arrest. The world watches as people & their voices are being muzzled in J&K. The same Kashmir that chose a secular democratic India is facing oppression of unimaginable magnitude. Wake up India.”

The government also imposed restrictions under Section 144 CrPC in Srinagar district with effect from midnight.

Earlier, the administration called off the Amarnath Yatra in an unprecedented move and asked all tourists to leave the state immediately.