While foreign investors are not allowed into the retail space, Flipkart is looking to tap the “food retail” business where 100% FDI is allowed and lets the investor open physical stores. The move comes after the company opened its fifth online grocery store, Supermart in Mumbai.

“Globally, around 50-60% of Walmart’s sales come from food. The strategy of opening offline stores falls into Walmart’s overall scheme of things,” a source told TOI. Walmart, which prides itself on its food and grocery business but is only allowed to operate a business-to-business (B2B) wholesale segment in India due to FDI regulations, does not want to be left behind. 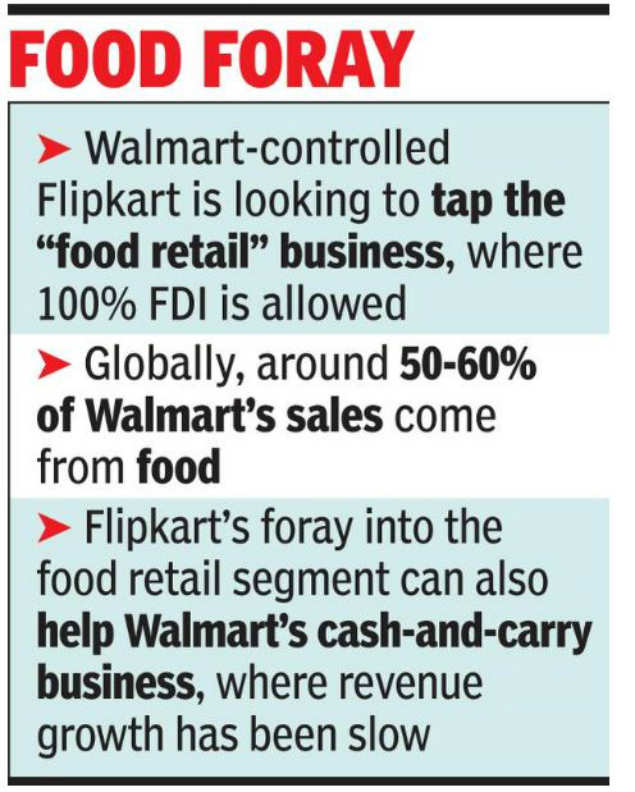 While a Flipkart India spokesperson did not respond to queries from TOI, sources said, the move to open offline stores will allow Flipkart to take advantage of Walmart’s expertise in food and grocery.

Amazon, Walmart’s arch rival globally, has committed an investment of $500 million in food retail, both online and offline, through its food retail arm Amazon Retail India. Other than buying a large stake in Aditya Birla Group’s food and grocery retail chain, More, the Seattle-headquartered retail giant is also acquiring a stake in Kishore Biyani-led Future Retail, which runs Easy Day and Big Bazaar chain of stores.

Grofers and Big Basket, too, have got government nod to sell locally produced food items and hold inventory of the same. With Amazon and now Mukesh Ambani-led Reliance Retail breathing down its neck, the Bengaluru-headquartered company is aggressively looking to expand its presence in India’s booming food retail market, which is set to double to around $800 billion in four years.

Apart from building separate supply chains for grocery, including fulfilment centres and lastmile delivery networks, it is also in talks to acquire Bengaluru-based grocery chain Namdhari Fresh, which will help it leapfrog into the food retail business. Food currently accounts for two-thirds of India’s overall retail market. Reliance Retail, too, is expected to storm Flipkart and Amazon’s turf, with its much touted e-commerce foray.

The Mumbai headquartered company operates around 10,500 offline stores in India spanning, wholesale, hypermarkets, supermarkets and speciality outlets, which it plans to leverage to take on the current market leaders. Interestingly, the recent tweaks in FDI norms in e-commerce came as a big setback for Walmart, which spent around $16 billion to pick up 77% in Flipkart.

The new rules punched a hole in Walmart’s plans to leverage Flipkart to cross-sell each other’s private brands. In its home market, the US, a large chunk of Walmart’s revenues comes from selling its own private brands.