The iPhone 7 is fast. Very fast! Although Apple did not talk about the exact hardware inside the phone, now that it is out people are putting it through benchmarks. A benchmark score that popped up on Geekbench shows the iPhone 7 Plus scoring 3233 points in the single core performance and the 5363 in the multi-core performance. 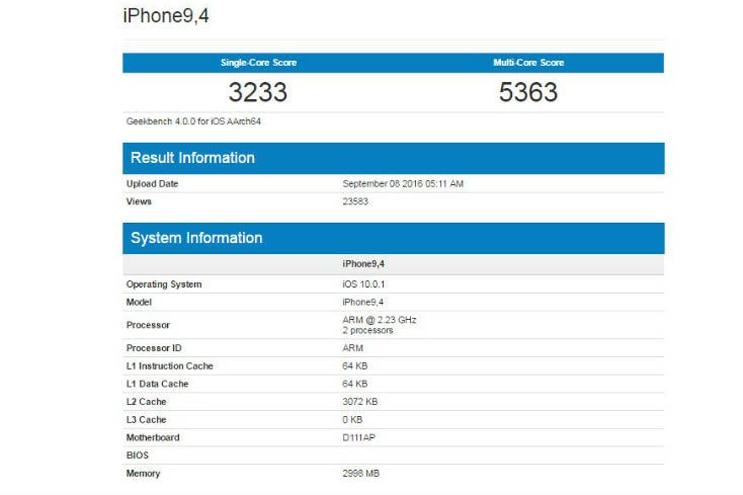 Sounds impressive? Sure it does. But you know what is even more impressive: in simple words, these numbers translate to this — the iPhone 7 Plus is the fastest mobile phone ever released. If these benchmarks are accurate, the iPhone 7 Plus is so fast that theoretically it can compute almost twice as fast as a Galaxy Note 7 or the Nexus 6P.

Hardware inside the iPhone 7

Apple during the launch event said that the iPhone 7 is powered by A10 Fusion processor. The A10 Fusion is an upgrade from A9X used in Apple’s iPad Pro 9.7.

Apple revealed some details of the A10 Fusion processor, but not the juicy ones. It said the A10 Fusion runs twice as fast as the iPhone 6 and it delivers graphics performance that can be up to three times faster. The company also said that the iPhone 7 will offer two extra hours of battery compared to iPhone 6S, while iPhone 7 Plus will be able to pull off one additional hour compared to iPhone 6S Plus. 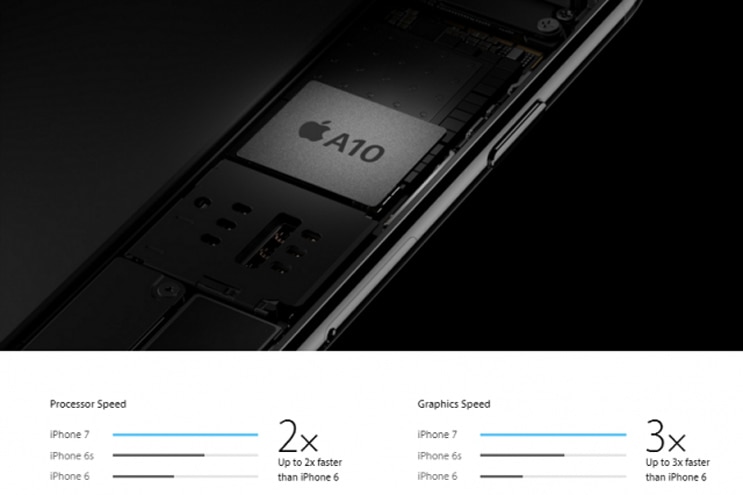 For long content with two-core processors, with the A10 Fusion Apple moves to the direction that the Android manufacturers have taken. The A10 Fusion has 4 cores. And the approach behind these cores is also similar to what we have seen in the world of Android phones: two high-performance cores and the two power-efficient cores. The approach is similar to that of ARM’s big.LITTLE technology. The A10 Fusion is Apple’s first quad-core chip with two cores running high-performance tasks and the other two take over for high-efficiency tasks to save energy.

The A10 Fusion’s two high performance cores can offer 40 per cent better performance than the A9, while the two high-efficiency cores draw only 1/5 the power compared to the high-end cores.

Apple didn’t say that it is using big.LITTLE in the A10 Fusion, but the architecture is similar. Although, given that this is Apple we are talking about — the company makes its own custom cores — it is likely that it must have built all the cores itself, instead of using the off-the-shelf cores the way some Android CPU makers like MediaTek and Qualcomm do.

The problem for the Android phone makers is that they just can’t catch up. The A9 inside the iPhone 6S is anyway so fast. And now with A10 Fusion, Apple widens the gap. There was a time when Apple was using processors made — but not designed — by Samsung. It was at that time when Apple was still selling its products based on design innovations and software superiority, not exactly on performance. With the launch of iPhone 5, Apple introduced its home-grown A6 processor, the company’s first processor that used custom cores at a time when Android makers were still using mostly off-the-shelf cores from ARM.

Next year, came Apple’s greatest hit and the one that really hit the Android world hard. This was A7, which was a 64-bit processor. It came at a time when the other big player in CPU making, Qualcomm, was still struggling with the 32-bit Snapdragon 805. It was not until Snapdragon 810 that Qualcomm had a 64-bit silicon. And we rather not remember 810’s fate.

Qualcomm took almost a year after Apple to come out with the 64-bit architecture in Snapdragon 810.

What started with A6 continued with A8, A9, A9X, and now A10 Fusion. Several benchmarks have shown that Apple’s iPhones over the years have only risen in performance numbers.

The other thing that makes Apple the leader in performance is the vertical integration, the hardware-software compatibility. Since Apple has complete control over its software and it makes its own processor, which helps it take care of slight irregularities caused by software and hardware mismatch. Other manufacturers lack this advantage, even though Samsung and Huawei have their own processors as Exynos and Kirin, respectively, the behaviour of Android is not entirely in their hands. This is not the case with Apple.

Although Apple is about five years late in joining the race of quad-core phones, the performance of iPhone 7 speaks for the lost years. And now that it seems to have joined the core-count race, it may get even more difficult for Android phone makers unless they do what Apple did and start designing their own custom cores.