Amazon to use Prime Now for food delivery launch

Amazon to use Prime Now for food delivery launch

BENGALURU: Prime Now, Amazon’s two-hour grocery delivery platform, could be the primary vehicle for its foray into food delivery business in India, four people aware of the company’s plan said. Amazon has also held preliminary talks with Ola’s food delivery unit Foodpanda for a potential partnership for this business which could be extended to an acquisition, these people added. They have also held talks with Uber Eats.

Prime Now, which was earlier known as Amazon Now, will serve as a platform focusing on high-frequency use cases of both food and grocery delivery, as Amazon looks to capture a bigger share of urban consumers wallet.

“Amazon has spent some time debating whether to build food delivery from scratch or go for partnership and investments. They seem to have opted for the latter. They have held talks with both Uber and Ola for it. Prime Now cannot be sustained just on the grocery delivery as the logistics team has questioned inefficient utilisation of delivery fleet for the express delivery platform,” a person aware of the development said. 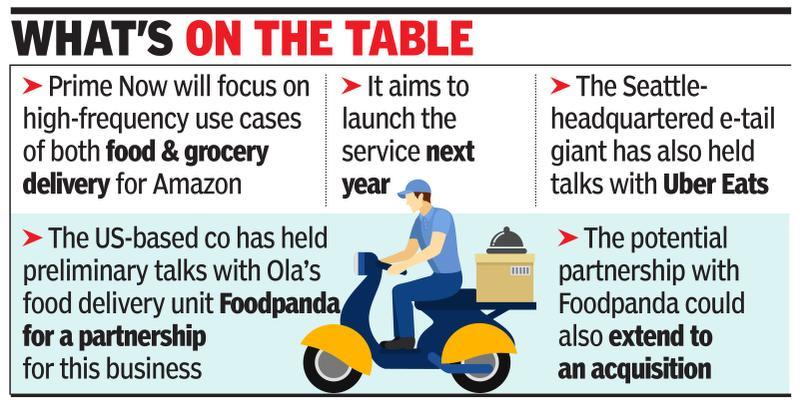 The Seattle-based online retail giant has not been able to find much success like Amazon’s monthly grocery business — Pantry. Online grocers like Bigbasket and Grofers are much ahead of Prime Now, which was launched to take on these companies in instant delivery category of the grocery segment. Grofers clocks about 1.5-1.8 million orders every month.

Siddharth Nambiar, head of Prime Now in India and Sameer Khetarpal, director (category management), Amazon India, are spearheading these talks for the food delivery business. Amazon is aiming to launch the service sometime next year even though a final timeline has not been decided yet.

People mentioned above added that Amazon’s plan was to start food delivery with brands like Rebel Foods (formerly Fassos), Eat.Fit (Cure.Fit’s food business), Domino’s and its own private brands. Incidentally, Foodpanda recently said it will focus on its private brand cloud kitchens that would be available across online food-tech platforms. It has about 50 such kitchens operating now.

Another person aware of Amazon’s interest in food delivery said the company has seen good traction among its wallet (Amazon Pay) users who are using the instrument to pay on platforms like Swiggy. “They are hoping they can replicate the same on their own food delivery business,” this person added.

This comes at a time when the food delivery space is seeing intense competition between Zomato and Swiggy, who contribute for most of the online food orders being placed in India. Last month, media reports said Amazon had held talks to buy Uber Eats India, as the latter has been finding it tough to sustain the price war locally, especially after it went public and it is facing investor scrutiny over its financials.

Uber CEO Dara Khosrowshahi said India’s food delivery market is ‘very competitive’ and it is at number three position. A deep-pocketed player like Amazon would have the muscle power to incentivise orders unlike Ola and Uber, who are reducing capital allocation for food business. Uber Eats is looking for a price tag of as much as $600 million for the India business, said one of the sources briefed on the matter.

When contacted, spokespeople of Amazon India and Ola said they do not comment on a potential deal or partnership. “Over the past year, we have built Ola’s food business grounds up, creating a range of owned food brands through our vast network of kitchens. These brands are now being made available on leading platforms and we continue to partner with more marketplaces, delivery services, as well as prominent food brands to further expand our offerings,” Ola said in its statement.